Sermon Jan 24, We are Ecumenical

This sermon is focused on 1 Corinthians 12 and on the subject of ecumenism.

I remember my confirmation—My dad was my pastor, as you probably know. One thing I remember, and that it seems is a common “strongest memory” for many people who go through confirmation is the opportunity to go and visit different faith groups

An experience that I treasure—one for which the value to me and my own walk of faith outweighs its proportion in time and space—is the few days I spent with Brother Aidan, a Greek Orthodox hermit monk living in the hills between Wales and England.

I had met Aidan at a lecture he was giving on iconography at a college in Oxford, and things fell into place for me to be able to go stay in a little guest cottage built over a creek on the grounds of the hermitage (which he had been commissioned to build and to turn into a monastery).

As I stayed there and enjoyed conversations and meals and work and worship, it struck me how different all the trappings of the Orthodox church were from my own experience of Christianity.

We would wake up at 4:30 or so in the morning, and begin the day with worship, Aidan would let me read some of the liturgies, and we’d stand in the chapel (there were no pews) surrounded by beautiful frescoed saints on the walls (Aidan was an iconographer) and incense candles burning a mysterious and inspiring scent. It felt delightfully different to worship in this way. It seemed exotic and enchanting, and yet it was my own tradition too. It was a Christian bridge into the culture and philosophy of the East that had first captured my attention when I started college and took classes in Chinese History and Buddhism, Hinduism, and

And yet, I also had a connection with this monk because we were both interested in how our faith values shape how we value the natural world. Aidan was re-foresting the hills that had been stripped bare by the mining exploits of the Romans some 2000 years ago. One thing I did while at the monastery was help Aidan cut up a tree that had fallen over a barbed wire fence and was allowing the sheep in one area to get into a field where Aidan had planted a bunch of saplings and eat them. I’ll remember sawing up that tree while it snowed as much as anything else I experienced there.

We are ecumenical. What does that mean? To me, ecumenical means that you acknowledge and show interest and delight in the diversity of the church, but you also seek common ground where we can be put our efforts on behalf of Christ.

And yet, we are different parts of the body. We have different strengths and weaknesses. This is something Paul makes clear in the Corinthians passage.
We are one body with many members. Each member has its functions. An ear can’t say to an eye, “because you can’t hear, you are of no use.”

Hearing about someone who had been denied the sacrament, and when she was able to take the sacrament here, it was the first time in years. It meant a lot to her.
One strength of our church is the open table—and we have it in part because our church is ecumenical.

The church is portrayed as a boat afloat on the sea of the world with the mast in the form of a cross. These early Christian symbols of the church embody faith and unity and carry the message of the ecumenical movement.
The symbol of the boat has its origins in the gospel story of the calling of the disciples by Jesus and the stilling of the storm on Lake Galilee.
The ecumenical symbol was in use even before the inauguration of the World Council of Churches (ecumenical organization to which the United Methodist Church belongs) in 1948, and has taken many variations since then.
Why the sea? Throughout the Bible, the sea represents chaos. The ecumenical movement is an acknowledgement that in this chaotic world, we are in the same boat with Christians of all kinds. We must conduct ourselves as sailors on a ship—we must be united in purpose, lest the stormy sea sink us.
As Martin Luther King Jr. said, “We are caught in an inescapable network of mutuality tied ni a single garment of destiny. Whatever affects one directly affects all indirectly.” We are in the same boat. If someone has a leak on their side of the boat, eventually the whole thing is going underwater.
We shouldn’t get bogged down in our differences when there is a task to do.

What should that purpose be?


Links:
Website of iconographer/hermit monk I stayed with, includes Photos of hermitage in shropshire under "Frescos":

If you're interested in more about Eastern Orthodoxy, OCCJ is hosting a Orthodox seminary professor to teach the basics this Sunday evening in Tulsa.

Just click the links below. You really only need the first two pages of the first link:
http://www.baylor.edu/christianethics/SingingOurLivesStudyGuide2.pdf

http://www.baylor.edu/christianethics/SingingOurLivesArticleBolin.pdf
By the way, when you click on these, you'll be prompted to download adobe acrobat if you don't already have it. If your computer says that you should update it, trust the update (acrobat is updated fairly frequently).
Posted by Morris FUMC at 8:41 AM No comments:

We'll begin our 5 week hymn study at church this Sunday (Jan. 24) at 5pm. Look over this article in preparation. If you'd like to have a copy of the study guide I'll be using, it is available here.
Posted by Morris FUMC at 10:01 PM No comments:

Come at 5pm on the 24th of January and join us as we meaning and story of some of our favorite hymns, what hymns and singing mean to us as people of faith, and much more. You can access the study guides we will draw from (we won't necessarily strictly follow this guide, but it will be of use to us) at Christian Reflection.
Posted by Morris FUMC at 2:45 PM No comments: 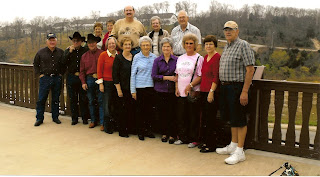 Each year, our church's 50/50 class takes a trip to Branson to see a show. Last year it was Noah's Ark. This year, the Nativity Story. Don't they look like they had fun?
Posted by Morris FUMC at 2:43 PM 1 comment: