What do we make of this strange testimony? In our day and age, the idea of our savior flying away in the sky strikes us as somewhat fanciful. How do we envision the scene—does Jesus peek over the edge of the cloud as he is whisked away like Alladin on a magic carpet? Does he raise up one fist and take off like Superman? The ascension is part of the creeds of the early church. What is important about this anyway?
A closer look at our scriptural tradition shows us that it is customary for God’s most important prophets to be lifted up from the Earth rather than perish and placed in the ground. Elijah and Enoch are said to have ascended into heaven. Elijah was carried away on a fiery chariot. The famous Rabbi of Alexandria, Philo, who was a contemporary of the Gospel writers and a favorite theologian among early Christians, wrote that Moses also ascended. John’s gospel speaks of Jesus being “lifted up,” as an implication of Christ’s death on the cross, lifted up in agony, an implication of Christ’s resurrection, lifted up in mystery, and Christ’s ascension—lifted up in glory. There is clearly more to this story than what is literally written.
The cloud that takes Jesus away is an allusion to the Shekinah—the presence of God formed in a cloud that can be found in the story of Moses receiving the law, and the presence of God in the tabernacle on route to the promised land, among others. In fact, Luke’s own gospel reports the descent of a cloud that covered the mountain at the Transfiguration of Jesus. And at this event, Moses and Elijah—both of whom ascended according to Jewish legend, are speaking with Jesus at that moment about what? Luke 9:30 tells us that they were speaking of “his departure, that would soon occur in Jerusalem.” All of these elements are linked together by the symbols chosen by Luke to report this story.
Ascension of Jesus/ Neo at the end of the Matrix. The Matrix is about Neo’s Mastery of the world that he used to know as reality. Through the help of others, Neo sees the world for what it is—a complex computer program that occupies the minds of every human on earth while machines use the energy from their bodies to power their society. Over the course of the movie, Neo is rescued from the Matrix by a group of revolutionaries, then learns to voluntarily enter the Matrix and learns to manipulate it. At the end of the film, there is nothing—not even death in the Matrix, which confines Neo to the laws of the world. The last scene of the film shows Neo taunting the rulers of the Matrix and then flying off—an illustration of his newly found power.
Ephesians tells us that our Christ was able to achieve a similar mastery of the world. “The world is under his feet, and he is above all power of the world.”
Are we to gaze up at the sky and imagine similar glory for ourselves? The two men in the sky tell us no—we are to wait for the power to come from on high down to us. How did Jesus master the world? The Holy Spirit came on him in the form of a dove at his baptism—he expressed this mastery in a no-holds barred Love for the entire Creation. He then said that he had come to baptize the world by fire. Next week at Pentecost we will talk more about this fire. It is a fire of Love. He Mastered the World by loving it. He conquered his enemies by loving them. This is not mere “fluffy teddy bear love” this love is called dynamis. Greek for tangible, visible power. Fire in souls. Fire of love so tangible and real it can be seen and heard by witnesses.
And so—instead of standing there gaping at the sky—the utter mysteriousness of our Lord should not inspire us to be navel-gazers on an individual hunt for enlightenment—We are to manifest this power in community. Paul commends his followers in Ephesus for their enlightened hearts—that they have seen Christ in his glory. And what is the most glorious aspect of Christ? What is it you see on Dali’s painting of the ascension? 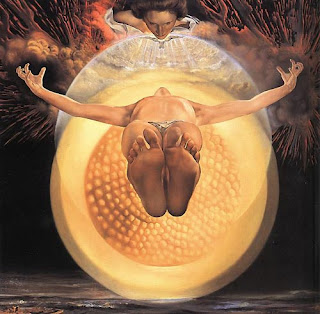 Good Article for your Sunday afternoon....or whenever

This Sunday you can be a part of our mission trip this summer to San Marcos, TX. How? By bringing family and friends to our potato bake fundraiser after church (noon).
A $5 donation gets you a loaded baked potato, drink, and dessert, and the feeling of worth that comes with contributing to something meaningful.
Tickets are for sale in advance or at the door. See you there!
Posted by Morris FUMC at 8:28 AM No comments:

Congrats to our grads! Jessica, Lawren, and Matt (Lauren and Thomas too, though they couldn't make it to chruch) 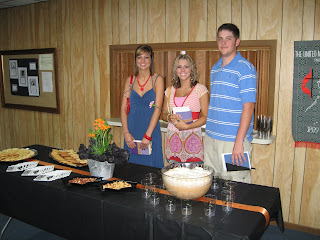 Making a Home in Christ

Tonight, the church council adopted a covenant for the protection of children, youth, and vulnerable adults that makes a committment to providing background checks through the Oklahoma Conference for everyone over the age of 18 who has direct contact with kids, youth, and vulnerable adults. If you're interested in more detail, we'll get you a copy of the covenant. In the meantime, if you are a worker with one of these groups, drop by the chruch to fill out the form! It is confidential, and will be filed in OKC with the conference office. It costs you nothing, and it is a good way to communicate our committment to children and youth in our community.

Also, the finance committee would like to invite the church, and especially all the contributors to the "Travel Savings Fund" to a month of discernment. The finance committee has noticed that over $3000 has been sitting untouched in a savings account for some time now as the church has contemplated the pros and cons of buying a church van. The consensus has generally been that a van's costs would outweigh its usage for our faith community. So the finance committee has proposed that we open the fund to be used for van rental and/or mileage recompensation for those willing to use their autos for church functions, including any church-related travel. (SASSYs trips, mission trips, youth trips, etc.) We know that there are many who contributed to this fund with the idea that we had the goal of getting a church van though, so we want to make sure we have every opportunity to hear from those who wish to have input on the decision. Another idea could be moving the funds to an account with the UM Foundation that would give a higher rate of return as the money sat in an account. If you wish to comment on this post, you may, or just call the church or write an email or letter. We want feedback!
Posted by Morris FUMC at 8:25 PM No comments:

Springfest/Silent Auction at Circle of Care, our UM Children's Home

Here is an email message I received and wasn't able to bring to church (since I wasn't there) this past Sunday. If you don't have plans on Saturday, consider going to Talequah to participate!


Greetings: Here is a "friendly reminder" of the upcoming Spring Fest. One new feature has been added. We will also have on display a Marine flying memorial to all Vietnam Veterans, the huge YL-37 Sikorsky helicopter. This is the big one that holds about 20 people. It was also known as the "Ugly Angel" by many, but I'm sure their hearts pounded when they heard and saw it coming. During the many missions she flew, it was fired upon many times by the Vietcong. Today she wears 54 patches over bullet holes. They operated out of every major air base in 1-Corps, S Vietnam , hospital ships and many aircraft carriers. The historic YL-37 is flown today with some of her surviving crew members, bringing to life the role in history she played to a new generation of young people as part of the "hands on" educational process. And she will be here on our campus for our Spring Fest. Come and enjoy seeing her!

Spring Fest will be on Saturday, May 12th from 1-6 PM. The event will also include: a Art Show with local artist Mike Daniel, a Car Show, a Silent Auction, music, face painting, pony rides, a petting zoo, open tours through our girl's cottages, burgers and trimmings for sale at the concessions, and ending with a Chapel service conducted by our Chaplin, Rev. Linda Pope .

I am asking that you and some of your groups help us with the silent auction before and on that day. We need donations for the silent auction, and helpers to help set up, and tally for the event. If your UMW groups, SS, UMM, or others would like to help make or gather items for this even, PLEASE... do so. Many enjoy making the theme baskets like they use at the UM Boys Ranch Rodeo, or certificates from retailers and businesses that provide services are also much welcomed. Quilts are a big seller, floral wreaths and centerpieces are also 'hot' items. Actually I've seen some very unusual items that went over well at these types of evens, so really there is no limit to what a person or group could come up with for a donation to the auction.
Posted by Morris FUMC at 7:55 AM No comments: