He told the story about two young girls who were carried up the stairs inside the climbing tower, and then strapped on to this new swing they’d had installed just this past year.  They would hook them in with harnesses, and then they’d get to go sailing out over the trees.  Randy recalled seeing one girl sailing through the air with her arms outstretched and reported to us that she felt free of her disability for the first time.
Experience of the High Life—this past week at Bishops’ retreat.  Rapelling and Swing.  Thrilling!  It most likely took some expense to build—and we give it away because that’s what Jesus calls us to do.

Don’t set their hopes on the uncertainty of riches, but rather on God who richly provides us with everything for our enjoyment.  Become rich in good works, “so that we may take hold of the life that really is life.”

Posted by Morris FUMC at 7:18 PM No comments:

Posted by Morris FUMC at 2:11 PM No comments:

Way to go Zack--his first chance to preach, I think--It is a video, so give it a look!
Posted by Morris FUMC at 8:45 PM No comments:

Our Church in Mission

At the end of August, several from our church went to the packing station for the Food Bank in Tulsa.  They got to help out in a fun way (packing boxes on a conveyor that would later be distributed), and had a real sense that they made an impact.  Thanks for shining the light, folks! 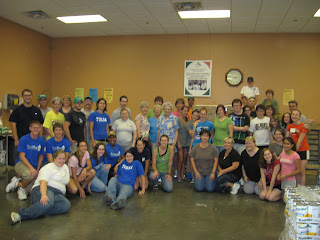 Posted by Morris FUMC at 8:18 AM No comments:

readings for monastics study: Bonhoeffer and the Finkenwalde project

http://www.baylor.edu/content/services/document.php/116020.pdf
Posted by Morris FUMC at 11:49 AM No comments:

Monasticism Study readings and study guide for week one


Something seems to be going on with the University of Tulsa NPR station, so fortunately, I’ve been getting a stronger signal from the OSU station than usual. And a program that that station carries that I’d not heard before is called “The Takeaway.”


I’m happy to say, I did indeed take away one story that I heard—and I did so because it fused with this scripture passage that we have in the lectionary today.

Taking up tennis raquets, taking up a cross.

Shouldering the hatred and enmity between those two countries, and offering up an alternative.

Counting the costs—they could be assassinated, they could be mocked or scorned by their own people—but instead they make plain their friendship, and even become teammates.

“must hate their own mother and father, brother and sister.” Jesus asks us to expand our notion of family. We are to be aware of a larger family that we all belong to. We are to love the stranger and the enemy as brothers and sisters.

Then Jesus goes into this extended metaphor, most likely poking fun of Herod, who had a penchant for building things to prove his illustriousness to a society that disliked their king. He takes the metaphor of a person building something, but first making sure they have the supplies, or the funds for the supplies, for the whole project before they begin.

This is how the tennis players have approached their game. They have taken the gifts that they have, and they have shouldered the chance of danger or simply embarrassment and ostracizing that they may receive on account of their partnership. Then they lift up a higher ideal to the world.

The two tennis players say that though you might expect that they would be the recipients of hate mail or threats, they have never even heard a cross word from their countrymen for their public friendship. Instead, the two countries are rallying around them, and some are pinning their hopes for lasting peace between these two rival cultures on the atmosphere of colleauguiality and sportsmanship surrounding these two players. They received an at-large bid to participate in the US open, and have won their first round, in part because of the possibilities that exist with this team.

The two are even planning a match between them to take place on the border of India and Pakistan, with the net of the tennis court going right down the border between those two countries.

This is the kind of thing we can do to “Lift high the cross” in our own lives. Lifting high the cross is sometimes a heroic statement to the world that gets lots of recognition. But the cross was a symbol of embarrassment in the Roman world. It was a punishment for common people who got in the way of Rome.

When Jesus was about 10 years old, hundreds of his countrymen were crucified on the same day for participating in a rebellion under a man named Judas. On other occasions, Rome lined the roads that they had built all over the world with the crosses of insurrectionists every 50 or so feet.

The scripture says that Jesus himself was crucified with 2 common thieves. Sometimes lifting up your cross can be through something that we might think of as mundane. Can two tennis players teaming up to be a doubles team be an example of taking up their cross? It can if it is done to promote peace and harmony between two warring cultures.

How can you promote peace and understanding and love of neighbor in your working environment? What are the costs for you by doing so? Social capital, embarrassment? Count the cost of following Jesus, and then put your relationship with Jesus into action in your life. Jesus said, it isn’t enough just to call out “Lord, Lord.” It also matters what you do with that connection to the Lord.
Posted by Morris FUMC at 12:07 PM No comments:

Pastor's Perspective: Of Monks and Men 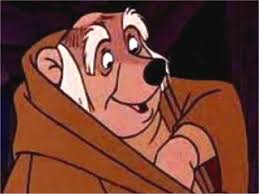 Ever since I was first exposed to Friar Tuck as the beer swilling, happy-go-lucky badger in a monk robe (voiced by Andy Devine)  in Disney’s Robin Hood, I’ve been fascinated with monks.  There is just something alluring about the life of intentional community or solitude, work as a devotional practice, and the ordering of one’s day according to the rhythm of prayer and scripture.
I’ve had several opportunities to learn and worship among monastic communities.  One of the most formative experiences in my spiritual life was my week long stay with Brother Aidan, a Greek Orthodox hermit monk in Wales.  Aidan is also an iconographer, and he inspired me to later learn that spiritual discipline.
I’ve also had a couple occasions to spend time with the Benedictine monks of St. John’s Abbey in Collegeville, MN and the nuns of their sister convent in St. Cloud, MN.  St. John’s is where Kathleen Norris (another Protestant enamored with the monastic life) wrote her well known book about that monastic community, The Cloister Walk (available to borrow in our church library with some other books by and about famous monks).
So, I’d like to share what I have learned with you and hopefully learn something new with you.  Beginning Sept. 12 at 5pm, we’ll begin a 5 part study of monasticism and new monasticism from the Christian Reflections series that we’ve used before.  The study guide is available online at our church website.  We’ll finish the five part study the second week of October, then the following two Sundays, we’ll have field trips that are available for everyone to attend.  The first will be to an afternoon workshop on “new monasticism and intentional community” with Shane Claiborne, author of The Irresistible Revolution and founding member of the “Simple Way” community in Philadelphia.  Shane grew up in the United Methodist Church in Tennessee, and was attracted to the same things about monasticism that I mentioned earlier—except Shane put those interests into action by starting a non-sectarian community of faith committed to Jesus’ command to “sell all your things and give them to the poor, then come and follow me.”  One difference between the Simple Way and traditional monastic communities is that the community incorporates married people and families fully into the community life of the group.  We’ll have a chance to hear from him on Sunday Oct. 17, leaving the church at 1pm, and then if you wish, to spend a few days at Canyon Camp learning from Elaine Heath, who has studied New Monastic groups like The Simple Way around the world and has developed an interesting theology of evangelism (called the Mystical Way of Evangelism) based on what she has learned (she’s a professor at Perkins School of Theology on SMU campus). She and Ray Buckley, a storyteller and specialist in Native American Spirituality are the featured speakers at this year’s Spiritual Formation Seminar hosted by our conference Oct. 17-22.  Spaces are available at the seminar for a discounted price for members of Oklahoma Conference churches at $200.
The following Sunday, Oct. 24, we’ll have a group from the church visit the Benedictine monks at St. Gregory’s Abbey in Shawnee.  We’ll leave the church at 2pm, and have a tour of the grounds with the Abbot, and then join the monks at the Vesper’s service at 5pm.  Prepare for some beautiful singing!  All are welcome on both of these field trips, but if you want the most “in-depth” experience, participate in the study beginning Sept. 12.
Posted by Morris FUMC at 11:27 AM No comments: